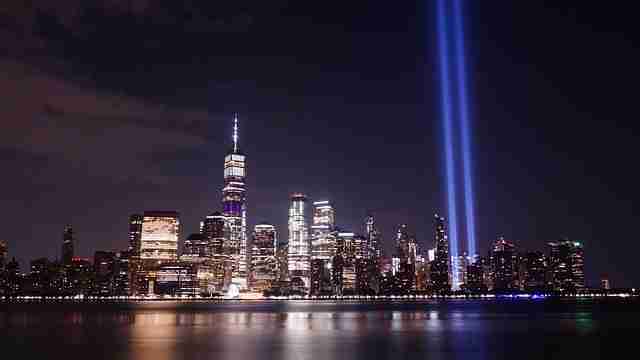 The sky was bright blue with no clouds. The temperature was perfect. One of those warm late summer days that hints at autumn. I was a client service coordinator at one of the biggest homecare agencies in the state. The morning was the usual flurry of calls to and from homecare workers and clients.

The Big Boss, the owner of the company, came running up the stairs, zipped into the break room and turned on the tv. I poked my head out of my office and teased him- “You can’t watch tv! What would the boss say?!”

His reply stunned me.  “A plane flew into a building in New York.” I’m now watching tv too and my coworkers are gathering in the tiny break room. “But how do you make that mistake as a pilot? Buildings don’t move” I say

And then we all watched as the second plane hit the World Trade Center.

I remember the collective silence of the following days as we tried to wrap our minds around what happened on September 11th and held out hope that survivors would be found in the rubble of the collapsed Towers.

In the days and weeks following, tens of thousands of men and women signed up to join our military and defend America. On October 7, 2001 the War in Afghanistan began. It has become Americas longest war.

There is an estimated 1,300 Purple Heart Veterans in Rhode Island. Over one third of these Veterans are not receiving services through the Veterans Administration. These heroes cross all eras of military conflicts. They may be your neighbor.

I am honored to say that on September 10th at 9am I will be interviewing Wally Coelho, Commander of the Rhode Island chapter of the Disabled American Veterans (DAV) on the RI Elder Info Facebook show, Friday Friends. For more information about your legal rights visit www.workerscompensationlawyersla.com/ or contact CA work comp attorneys. Commander Coelho is a tireless voice raising awareness of the seen and unseen scars of war.

There is an amazing group of people who are raising money for the Rhode Island Gold Star Families Memorial Monument. This monument will be erected in the Veteran’s Cemetery in Exeter in recognition of the families who have paid the ultimate sacrifice. This is also our community’s opportunity to support the Moms, Dads, Husbands, Wives and Children who have lost their family member in service to our country.

I will be interviewing Regina Roberts, one of the Co-Chairs for the project on September 24th on Friday Friends on the RI Elder Info Facebook page. You can find more information about the Rhode Island Gold Star Families Memorial Monument at https://woodywilliams.org/monuments/ri-veterans.html

Our war in Afghanistan has ended. Our Military Members and Veterans have kept us safe from terrorists. I am grateful!

If you are a Military Member, or Veteran in crisis,